The Human Ear and Auditory System

We learned about how sound is created as a series of vibrations which travel outward through the air as sound waves. But in order for our brain to be able to receive these waves and recognize them as particular sounds, A few more steps are required. In this section we'll look at what takes place after these waves have reached our ears.

Prior to describing the path sound waves take. I just want to point out that the human ear can be divided into 3 regions as shown in the diagram to the right. These are the outer ear, the middle ear, and the inner ear.

Sound waves have to pass through all the areas of the ear before being sent to the brain and recognized as a particular pitch.

So as the sound waves hit the ear, they are funneled down from the  outer ear into the Ear Canal  where the quickly reach the eardrum, a thin membrane which separates the canal from the middle ear. Here, the sound waves hit the eardrum and just like a real drum, cause it to vibrate sympathetically at the exact frequency of the initial sound source. 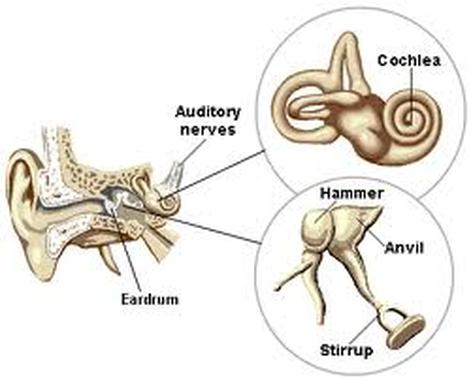 The sound waves next pass into the middle section of the ear where the 3 smallest bones in the human body are located. These bones, named colloquially the hammer, anvil, and stirrup based off their appearance, serve a very important function. They take the sound wave, and amplify its signal significantly through mechanical vibration. This is crucial because otherwise the signal would be too weak to pass through the membrane which covers the opening to the cochlea.

The final step in the sound process then, is that these electrical pulses exit the Cochlea through the Auditory Nerve, which then sends the signals to the brain, which recognizes the sound as a particular pitch. The process might seem like it has lots of happens, but remember that these all take place in fractions of a millisecond, and so our ears are constantly going through this process of collecting and interpreting sound waves!
Is this still not really clear?
If this process seems kind of confusing, try  watching the following short clip, to see a further visual demonstration of how the human ear works!